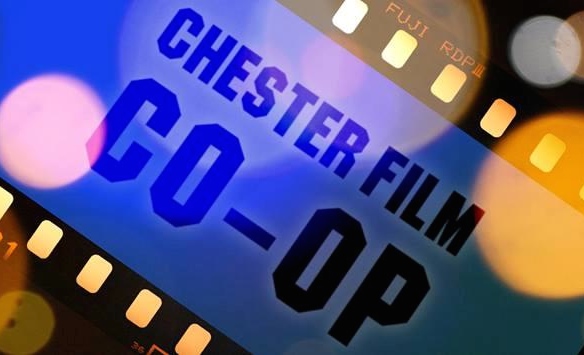 On the bustling city centre high street that is Chester’s Northgate, you will find the area’s very own secret cinema. Chester Film Co-op, on the site of the old Odeon complex is a recent addition to Chester’s somewhat sparse contemporary arts scene.

A new venture as part of a wider redevelopment to turn the unloved street corner into a culture hub for 2016, the Co-op is run by a collective of volunteer members, who bring together local filmmakers and creatives to present their work and collaborate on new projects. At present, the 6 core members of the Co-op are; Caroline Backhouse, Mark Ellingham, Jodie Forshaw, Dan Fox, Nathan Head, Natalie Meer and Mark Smith. The Co-op consists of two spaces; Studio 1, an intimate living room-sized area for screening contemporary artists films, and Studio 2, a performance space used for meetings and pop up events pending artist proposals.

Opened in September 2013, Chester Film Co-op has since hosted four exhibitions, in addition to a series of events and networking opportunities for artists. The current exhibition, Here, includes the work of three North West based video artists with noteworthy international profiles: Paul Rooney, Imogen Stidworthy and Emma Rushton & Derek Tyman.

The programme of three short films is varied in style and hopefully indicative of the range of work being shown here in the future too. Paul Rooney’s Dust (2006) combines a female monologue telling tales of ships lost at sea with a steady visual of a boat out on the water. As the camera pans endlessly round in a loop about the deck, the viewer realises the peaceful, still vessel is actually hopelessly searching for land. Imogen Stidworthy’sBarrabackslarrabang (2009-10) explores language and culture by interspersing the speech of group of interviewees with ‘rogue sounds’ to confuse the ear of the audience, raising questions of censorship and freedom of communication for minority groups. Lastly, Liar (2013) by Rushton and Tyman references 1960s classic Billy Liar cutting between fantasy and reality as the film’s hero  dreams of a life away from his dreary Northern existence.

You can see the work of the participating artists every Saturday from 12-4pm inside Studio 1, and every evening throughout the week, the same films are projected through the screen onto the window, backlit for audiences to watch from the street outside. The outdoor screenings in particular have had a great positive response from locals so far, which surely indicates a hunger in Chester for more visual art in the city.

Continuing their commitment to showcasing local talent, the next exhibition Emerging Talent will feature the work of film graduates from Manchester, Liverpool and Chester and opens this Thursday 14 August.