Posted on March 5, 2013 by teafortwotalk 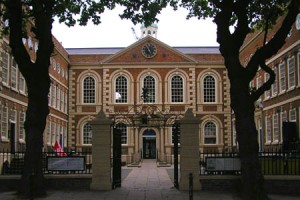 Sara Devoreux-Ward is a North-West based artist and printmaker, currently enjoying her first exhibition at The Bluecoat; Are You Connected?

The exhibition deals with the social and cultural impact of communication technologies, and how the development of such technology hinders social contact.  Devoreux-Ward examines through printmaking, the correlation between traditional, mechanical processes and their modern, digital counterparts.

The first experience as one enters the space is a quotation from EF Schumacher:

In the context of her work, this quotation yields a lot of truth: as we move forward technologically, our reliance upon mobile, vulnerable objects is paramount to our existence. Communication and social interaction have become mobile: we communicate with one another whilst on the move, whilst absorbed in other things, and whilst ignoring the reality around us.

In a series of prints, using PCB etchings, collagraph and letterpress, Devoreux-Ward addresses this isolation from reality, and connection to computer screens and electric devices. The artist playfully explores our relationship with technology by giving gadgets a voice; a dark and controlling voice. Why Do You Turn Me On and Are You Hungry explore the idea of technology communicating with us, rather than us using it as a tool to contact other people.

I found Are You Hungry particularly unnerving, as the television set asks the viewer the above question – to me, this is a direct assault on the use of technology in advertising, and how we are constantly injected with ideas forced upon us by large corporations; we are no longer thinking for ourselves. This theme is echoed in Push My Buttons as a games console implores its owner to engage in a virtual reality.

Touch Me, which is an image of a television set projecting these words, with a cat turning its head away, I found very significant. The cat, uninterested by technology and therefore not susceptible to its allures, disregards the screen in a way that we as humans and mass-consumers of technology should envy.

Devoraux-Ward uses the image of the pylon to denote the correlation between technology and the transmission of language, but most importantly (returning to Schumacher), the vulnerability of what we rely on, in a work ironically titled Tower of Knowledge, where a pylon is depicted exposed to the elements, in a natural country landscape. In a series of 3 photopolymer etchings, entitled Mother of Invention I, II, III, the artist toys with the idea of motherhood through the use of the pylon as mother. The pylon symbolises how we communicate through technology, and there is one golden question encouraged: what has this given birth to? The pylon itself is cold, grey, mechanical, destructible and seems old-fashioned compared to how we now think of communication today: as intangible words and codes floating through space and time via satellite.

I also enjoyed the final series of prints, which communicated to one another across the gallery space, finishing each another’s messages. Many a true word is… is an image of a vintage type writer, here heralded as the link between the written word and computer processing; the invention that first distanced us from human communication. This piece is then answered with a similar image entitled Spoken in Jest, completing the sentence and the thought process of the viewer. Similarly, images of an old computer are captioned Jack of all trades…Master of none, perhaps suggesting that human skill still trumps technology.

My favourite in this last collection are the images of the Iphones, entitled You can’t teach an old dog… and New Tricks, which pokes fun at the iconic accessory-cum-gadget, which at the end of the day, is still a phone.

A brilliant debut at one of Liverpool’s top galleries, I highly recommend this collection of work, which promises to engage the audience in a dialogue far removed from gadgets and machines.