Posted on February 21, 2013 by teafortwotalk 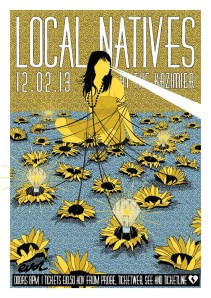 The atmosphere in the Kazimier is electric as BALTHAZAR take to the stage. The Belgian five-piece boast an indie-rock sound, with bluesy undertones, and their opening track Fifteen Floors was the favourite of the night.

Next, LOCAL NATIVES supplied a set list that included beloved classics as well as new material from their current album Hummingbird, and the four-piece certainly delivered an exciting performance.

High expectations from an audience in awe of the group were met by beautiful vocal harmonies and Matt Frazier’s infectious drum beats. The band proved that they excel live, and thrive on the energy of tracks from their first album Gorilla Manor, including crowd-pleasing renditions of Camera Talk and World News.

Although the old songs all proved to be hugely popular and brilliant live, many of the band’s new songs felt like ‘filler’ and left the audience a little cold and disappointed. The new album seems too reliant on Taylor Rice’s vocal performance, and lacks the interesting melodies of the first record, with tracks like Ceilings sounding more shoegaze than psych-folk.

Thankfully Local Natives went out on a high, with an encore of tracks from the first album leaving a bursting room of loyal and satisfied fans expectant for more from the Californian collective.

This review was written for Bido Lito! Magazine