Posted on November 29, 2012 by teafortwotalk

Who could have possibly thought that an evening of cuisine foraged and prepared by a team of third year trainee chefs could be worthy of a five star review?

When I heard about the Academy’s forthcoming event ‘The Gathering’, I truly did not anticipate such satisfaction, but when I saw the menu, my hopes were of course raised. Boasting six courses of the most innovative dishes I have ever read on a menu, I had to be excited. Advertising food that is local, seasonal, fairtrade, organic and foraged, this was certainly going to be a one-of-a-kind dining experience.

As we walked into the restaurant, all fears of a canteen-style school dinner were thankfully removed: we entered a room that was simple and elegant, with wonderful natural table decorations of green leaves and candles. To add to the homegrown atmosphere, all the waiting staff wore green aprons and wellies, which was a lovely touch and raised a smile from every diner.

On arrival, we were greeted by a glass of Elder Flower Fizz: a light, sparkling cava with a splash of elderflower cordial and a single blackberry, which added a uniquely fruity flavour to the drink. As we approached our table, the waiter announced the first course to accompany our wine: the Amuse Bouche. For the meat-eaters this was a canapé of smoked salmon in a poppy seeded roll, whilst the veggies enjoyed a bruschetta of tomatoes, pepper, mushrooms and onion. Both were skilfully assembled and offered a brilliant taster of the unique dishes to come.

To start, the table shared a platter of Warm Roasted vegetables, including artichoke, celeriac, apple and onion. This was accompanied by a Blue Cheese dressing and Lavender and Apple vinaigrette, which was nothing short of genius. The vegetables were cooked to perfection and the apple was an interesting addition to the vegetable selection, actually complementing the other flavours really well. The dressings were also well considered, and added subtle pangs of flavour to the already delectable dish. My only (very small) concern was that the outer leaves of artichoke were a little over-cooked and chewy, but this hardly detracted from an otherwise spot-on starter. 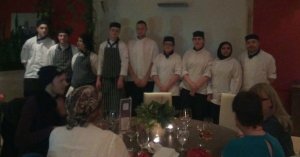 This was followed by a soup, which is something I am always fussy about. I like my soup to be thick and creamy, and the Academy’s offering was an unexpected hit. For the vegetarians, a creamed tomato and elderberry soup was accompanied by a choice of homemade artisan breads: oatmeal, focaccia or white. I chose the oatmeal, with homemade herby butter, and the pair proved an excellent choice; the bread was soft and doughy, with the creamy butter oozing into the roll. The non-vegetarians had traditional Borscht, which also proved to be truly satisfying.

The soup was fantastic alone, but also came with a number of optional additions: fried croutons were lovely, and the home soured cream with beetroot jus was another inspired idea which complemented the starter perfectly. 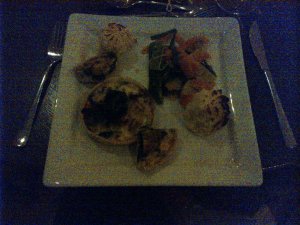 Beginning to feel quite full already, we moved onto the main course: Sloe Braised Pork Cassoulet for the majority, with a vegetarian alternative of Spinach, Leek, Herb and Cheese tarlet, both accompanied by Duchess Potatoes and Seasonal Vegetables. Despite tutor Brian Hough’s assertion that taste was more important than presentation tonight, the main course looked effortlessly professional on the plate, with the potato towers hinting at real talent in the kitchen. I really enjoyed the main course, though would have liked a jus or gravy with the potatoes as I found these a little dry. The tartlet, however, was light and flavoursome, and the vegetables seasoned with a light, yet intriguing dressing. I loved the importance placed on seasonal produce for this event, which also valued ethically-sourced food.

After an interesting conversation with tutor Chris Boylan, who explained the sources of many of the ingredients, we moved onto dessert. Each guest was treated to a platter of three mini individual desserts: an Elderberry Meringue, Pear Apple and Blackberry Oat Crunch, and a scoop of Rosehip Ripple ice cream. The meringue was sweet and fruity; the crumble oaty, with every fruit holding its own against the biscuity crunch. My favourite by far though was the ice cream, as the rosehip was delicate yet achieved a balance with the milky ice cream.

And as if five courses of the highest standard were not enough, we were presented with a sharer of petit fours to finish. A selection of Lavender Glazed Shortbread, Chocolate Fudge and Chestnut Macaroons were set before us, and with bulging bellies we elected to have a small taste. I liked the shortbread most of all, having never tasted lavender in such a way before. All three made an impressive end to the meal, and I even requested to take home a doggy bag!

The Academy Restaurant really achieved something incredibly special with this event: the menu was original and unique, putting together combinations of ingredients that diners would not expect, and doing so with flair. Every course was packed with flavour and displayed a talent in the kitchen that is rare to see in many top restaurants. Presentation of the food was impressive, and the overall decor for the evening was also gratefully in keeping with the creative theme. The waiting staff were all very attentive too, and the tutors so helpful with the numerous questions from the delighted diners.

For six courses of the very best cooking, £15 hardly broke the bank. The restaurant ususally offers a taster menu for £25 and also advertises a very reasonable menu for 2 and 3 course meals and I can guarantee you can expect amazing value for money. These young chefs have great talent, and will undoubtedly go on to great things, and so I urge all foodies to try out the Academy; preparing future masterchefs for success.