The Human Cost of a University Degree 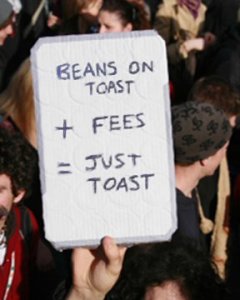 We live in a society where the rich are constantly being rewarded for being rich. This class competition is all around us, and particularly affects students and graduates in the current economic climate.

Take for instance the rise in tuition fees: this is a topic that has had a lot of attention in the press and wider society within the last couple of years, but is still a hotly disputed topic. On a personal level, if fees had been that high, I probably would have chosen another route into my career than taking a degree course. My student debt, after 3 years of lower priced fees plus living expenses stands at around £27000. Future graduates, such as my younger brother, can expect to pay £27 000 just for course fees, so with added living costs, this can total anything from £42-50 000. For my brother, University is a must due to his chosen career: teaching. For vocational jobs such as this, where the course is tailored to train you specifically for you career, then University fees cannot put you off. However, for people like me who studied humanities subjects which do not lead to a definite career, I think a lot of would-be students will be thinking of other options, such as internships and work experience.

Internships, however, can be just as demoralising, as many are unpaid, and again, this gives the rich priority. If parents earn a lot of money, their children can afford to work unpaid for years on end and not worry about living costs and other outgoings. For the working class, however well we did at school, this just isn’t an option. I have spoken to a lot of people that I know, and it is a familiar story all around. Many of my friends have good degrees, yet find that to even apply for a job they need to intern or gain unpaid work experience first. This leads to people taking retail and bar jobs that do not necessarily satisfy them, when they have ambition in other areas. I know people who feel ‘trapped’ after working in a shop for 3 years after graduating, still no closer to achieving their dream job, due to financial worries, and the risk of unpaid work potentially thwarting their current job security. It is a sad state of affairs when graduates have to cling to retail and bar work, knowing that if they take time off for work experience, they may not have a job to come back to, despite their hard-earned skills and qualifications.

This begs the question: did Thatcher’s Britain ever really go away? With a Tory government in power, and the economy favouring the rich, what are the rest of us supposed to do? Schools encourage children to aim high, but if a working class student leaves school with straight As, but can’t afford to go to University, then surely that feels like a lot of effort gone to waste. At a higher level, those of us who have graduated and strive to maintain our independence seek to move away from home, and so take up any job we can to afford this lifestyle choice. Ultimately though, this can affect our job prospects negatively, and dissuade people from following their chosen career path, in favour of what is easy, achievable and finally convenient.

So what’s next for Britain’s graduates? At the moment, University for many is a depressing thought, with the idea of debt obscuring any positive dreams and aspirations that can come with a degree. For graduates, the job market is as difficult as ever to tap into, with companies demanding excessive amounts of experience for unpaid positions, forcing young people into entry-level work, making their degrees seem superfluous. All we can hope for is an end to the recession and a rush of jobs for graduates, but with the current economic situation at a stand-still, this could all be in vain.