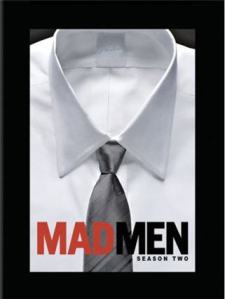 After a perfectly produced and delivered Season 1, Mad Men returns for a second, equally riveting and equally elegant series.

Now that the characters are established, Season 2 was much more focussed on progressing the plot. There is still the beautiful rendering of an early 1960s microcosm, but the characters have become far more developed, and their stories more involving.

Don Draper (Jon Hamm) finally gets his come-uppance in Season 2, as Betty realises he has been making a fool of her by having affairs with other women. It is a miracle that Betty (January Jones) did not notice this sooner, but one must remember the importance of a housewife knowing her place in the 50s and 60s, and Betty usually fulfils her duty by being submissive and gracious towards her husband. Although Betty reacts to her instincts like a petulant child, melodramatically lying in bed all day and ignoring her children in a selfish manner, she is right to banish Don to a hotel. I did not, however, appreciate her own foray into adultery, yet found it fitting with her character, as although she doesn’t deserve Don’s infidelity, she is a deeply spoilt middle class woman. Their relationship, for me, represents the solid centre of the Madison Avenue world, and it seems in Season 2 that their separation is a catalyst for relationship drama with the other characters, as well as the uncertainty of the future of Sterling-Cooper.

Don’s reaction to their separation sees him experiencing a dream-like holiday in California, which appears totally surreal. The fact that we never learn what really happened and who the strange group of people hosting him were makes the scene more intriguing, and points to deeper elements of Don’s character to be explored. I particularly enjoyed the scenes in which he visited the (real) widowed Mrs Draper, as this explored a more sensitive and honest side of Don’s character, which juxtaposed his adultery and opened up a new storyline and characters.

My favourite aspect of Season 2 though, was the way in which the female characters have come to the foreground. Aside from the delve into Don’s past, the series opened with a party hosted by Paul Kinsey (Michael Gladis), and introduced his girlfriend, a black woman who works in a supermarket. Although Kinsey enjoys to portray himself as a Beatnik, and is accused of having a relationship with her ‘for show’, it is refreshing to see a black character in a role other than maid or elevator attendant, and reflects the rise of the Civil Rights movement in America at the time.

Peggy Olson (Elisabeth Moss) finally receives acknowledgement for her work in this Season, and blossoms as a Junior Copywriter. Despite facing jokes from the male characters about her new role, it is great to see Peggy finally achieving success in the office, after the recent trauma in her personal life. This is also explored in Season 2, with flashbacks of Peggy in the hospital with no memory of being pregnant nor of having the baby: it is left ambiguous as to whether she has really forgotten the event, or her subconscious is blanking the past out, but this insight into psychological problems is a contemporary issue, considering the growing interest in psychology around the Cold War. Don Draper also appears in one of these flashbacks, again showing a sensitive side to his character as he comes to visit her in hospital to urge her back to work.

Another prominent female character granted extra exposure in this Season is Joan Holloway (Christina Hendricks), now Joan Harris after her marriage to a doctor. In the scenes in their shared flat, it is refreshing to see Joan maintains her dignity and control over her household, refusing to be the housewife her husband wants her to be. There was, however, a scene in which Joan is basically raped by her husband in the office, which for me was impossible to watch, and deeply upsetting given Joan’s devotion to him and what was presented as an equal relationship compared to other marriages in the series. Joan also experiences disappointment at work; after Harry Crane (Rich Sommer) involved her with his TV department, I had hoped she would earn a promotion, and found it completely unfair when she missed out on this opportunity, yet totally befitting to such a male-dominated environment, where Joan is objectified, rather than appreciated.

Pete Campbell is creepy as ever, which I love, and his relationship with Trudy is explored in more depth, as we see how unhappy they are, mostly due to their inability to conceive. After we learn that Pete is not the problem, Peggy confides her secret in him, and leaves Pete confused and upset: perhaps there is a future for these two? Although Pete can be awfully annoying, he seems at his most confident and honest around Peggy, so this storyline could potentially benefit them both, as she loses the interest of another man (a priest) after he learns of her child born out of wedlock. To me this was a good thing really, as involvement with the church and her family was making Peggy unhappy anyway.

I also enjoyed the development of Romano (Bryan Batt) and Cosgrove (Aaron Staton), as they socialise together outside of work, and we realise how ill-suited Romano and his wife are, (and her inability to see his latent homosexual desires), as well as how desperately Cosgrove needs a woman! Mark Moses as Duck Phillips is a new addition to the cast, and is a suspicious character, as well as a catalyst for the (SPOILR!) European take over of Sterling-Cooper in Season 3. Bertram Cooper (Robert Morse) makes some amusing appearances, and Roger Sterling (John Slattery) appears to be going through a mid-life crisis, as he becomes engaged to Don’s secretary Jane (Peyton List), who wears some fabulous outfits, and seems to represent the new wave of fashion, compared to Betty’s more traditional wardrobe.

Style is still an essential part of Mad Men and Season 2 does not disappoint on the fashion front, with incredible dresses worn by Hendricks and Jones, as well as a much-needed make-over for Moss. Moss’ new look is very cute yet much more grown up than her school-girl pony tail, and after her baby, her figure looks incredible in her new wardrobe. Her new look also reflects how she has begun to be taken seriously at work, and noticed by the men. Another new edition to the cast’s wardrobe is Kinsey’s beard, somewhat of a shock compared to the clean shaven majority of Sterling Cooper’s work force, but it suits his increasingly alternative character. Horse riding attire also makes several appearances, as Betty involves herself more and more in her hobby as her relationship with Don suffers, and even after a ride she looks as immaculate as ever.

Another important aspect of the series is the social-political context of the era. The threat and fear of the Cold War is continually addressed, with allusions to bombings, and recordings of political speeches on radio and TV in the background of many scenes. The stand-out historical event for me in this season was the death of Marilyn Monroe, dealt with realistically, with secretaries getting sent home from work in floods of tears upon the news of the death of their icon. What was brilliant narratively about the inclusion of this news, was that it linked to a campaign in a previous episode, which highlighted Monroe’s influence on women’s fashion and identity at the time.

Another magnificent season from Matthew Weiner and the whole production team, and I eagerly anticipate the stories, style and seductions of Season 3.